The History of Floods

Napa River floods are nothing new. No doubt this Valley has been inundated on a regular basis for thousands of years.  Since settlers began keeping track of such notable events, 21 serious floods have been recorded from 1862 to the present day.  The first photo in the slideshow below was taken on Brown Street in 1905. 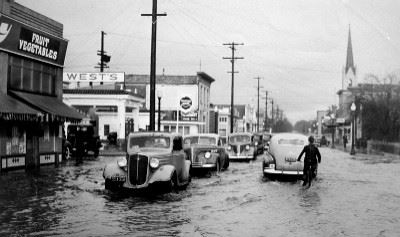 The Federal Government first authorized "preliminary examinations and surveys" of the Napa River in 1938.  Six years later in 1944, a report recommended channel improvements and construction of a dam  on Conn Creek.  Although authorized by the Flood Control Act of 1944, Congress never appropriated construction funds.  In 1948, the City of Napa built a dam on Conn Creek to establish a water conservation reservoir that is known as Lake Hennessy.

Conn Dam did not solve the flood problem for Napa Valley.  After the flood of 1955, Congress again addressed the issue, resulting in a 1963 report that said the Federal Government should "adopt a project in the basin below Trancas Street for flood control and recreation purposes."

Time passed.  In 1975, the U.S. Army Corps of Engineers completed a General Design Memorandum (GDM) and Environmental Impact Statement (EIS).  Put to the voters in the down economy years of 1976 and again in 1977, the plan failed to garner the needed local support, perhaps due to (a) the prevailing anti-tax mood of the time, (b) the inclusion of recreation elements that some thought were unnecessary, (c) a belief that the design was environmentally insensitive, or (d) all of the above. The Napa River Flood Project was shelved.

In February of 1986 came another flood, a flood of a power few living had seen before.  The aerial photo below shows the extent of flooding in 1986.  Again, it was said that "something must be done".

In 1987, the Napa County Flood Control and Water Conservation District asked to revive the dormant project, and the plans came off the shelf in 1988.

Time passed.  In April 1995 the Corps offered a new plan. The plan's traditional approach - enlarging the River channel and constraining the River within that channel - was met with an underwhelming response in Napa.  The proposal was seen to be "environmentally insensitive" at best and did not inspire aesthetically.  Lacking local support, the new plan appeared to be dead on arrival.

Some in the Napa community were not ready to give up.  Coming together in a precedent-setting cooperative coalition were representatives of diverse interest groups - the newly formed Friends of the Napa River to the Napa Valley Economic Development Corporation, the Farm Bureau, the Convention and Visitors Bureau, the Sierra Club, and the Chamber of Commerce - to take part in a series of meetings from January 1996 to May 1997.  Thousands of hours of meetings later, a "living river" design achieved consensus.

Less than one year later, in March 1998, a proposal to add a half-cent to the Napa County sales tax to fund the local share of this Flood Project was put before the voters.  A two-thirds majority was required to approve the tax increase.  More than 27,000 voters cast a ballot on that election day, and Measure A passed with just 308 votes to spare.