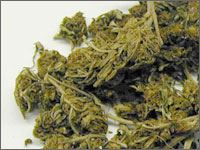 Marijuana refers to the leaves and flowering buds of the hemp plant. Marijuana is the most commonly used illegal drug in Napa County. The production of marijuana within Napa County rivals that of the grape crop averaging between $250 and $300 million dollars. Much of the illicit crop grown in Napa County is grown on private lands due to the accessible water source. Those who grow marijuana on private lands subject the property owner to the damages to their property which includes:

Marijuana contains a chemical called Tetrhydrocannabino or THC. It is the THC which provides the pleasurable effects of smoking marijuana. Marijuana varies significantly in its potency depending on the source and selection of plant materials. The form of marijuana known as sinsemilla, or “bud,” derives from the unpollinated female cannabis plant and is preferred for its high THC content.

The short-term effects of marijuana use include:

Long term use can lead to:

Medical complications include an increased risk of chronic cough, bronchitis, and emphysema.

Napa County law enforcement recognizes and complies with the provisions of Prop 215 and is guided by legal opinions of the California Attorney General and court decisions. Marijuana possession and cultivation cases are reviewed by the Napa County District Attorney on a one on one basis.