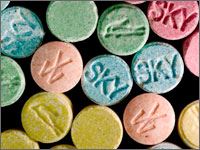 MDMA also known by the street name of “ecstasy” is a synthetic drug with both stimulant and hallucinogenic properties. Ecstasy is typically distributed:

The general effects of ecstasy use include increased:

Long term effects of ecstasy use / MDMA use include:

Of great concern is MDMA’s adverse effect on the pumping efficiency of the heart and increased physical activity all of which places a strain on cardiovascular system.

MDMA in its true form works in the brain by increasing the activity levels of at least three neuro-transmitters, serotonin, dopamine, and norepinephrine. MDMA causes these neurotransmitters to be released from their storage sites in neurons result in increased brain activity. By releasing large amounts of serotonin and also interfering with its synthesis, MDMA caused the brain to become significantly depleted of this important neurotransmitter. As a result, it takes the human brain time to rebuild its serotonin levels. Persistent deficits in serotonin are likely responsible for many of the persistent behavioral effects that the user experiences.

In Napa County MDMA or ecstasy is sold in pill form. The pills can be of various sizes and colors. Imprinted designs on the pills are not uncommon. The drug can be used to reduce inhibitions and eliminate anxiety and produces feelings of empathy for others.