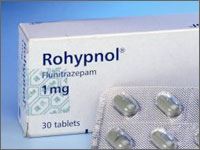 Date rape drugs are used to assist a sexual assault. Sexual assault is any type of sexual activity that a person does not agree to. It can include inappropriate touching, vaginal penetration, sexual intercourse, rape, and attempted rape. Because of the effects of these drugs, victims may be physically helpless, unable to refuse sex, and can’t remember what happened. The drugs often have no color, smell, or taste and are easily added to flavored drinks without the victim’s knowledge. There are at least three date rape drugs:

This drug can be in a liquid, white powder and pill form. As a liquid is has no distinguishable color or odor. Once ingested the drug can cause problems for the victim including:

Ketamine is almost always found in a white powder form as a veterinary medicine. The victim may feel detached from her environment. The drug has pain relief and memory loss properties. Like GHB Ketamine quickly metabolizes in the body and can be difficult to detect with drug tests.

Rohypnol is a strong sedative which is similar to the drug Valium. Rohypnol dissolves easily in juice, coffee, carbonated and alcoholic beverages. It comes in a pill form and when mixed in a liquid is colorless, odorless and tasteless. Like GHB and Ketamine, when Rohypnol is mixed with alcohol the effect can be severe disorientation and “blackouts.”

How to Protect Yourself