Several investigators have stated that the primary source of groundwater produced in the MST is the tuffaceous member of the Sonoma Volcanics which is primarily situated in the northern and southern parts of the MST on the eastern side of the Soda Creek Fault (Johnson, 1977; Farrar and Metzger, 2003). Beneath the tuff, and underlying the entire MST, are the andesitic and basaltic lava flows of the Sonoma Volcanics that provide small amounts of water to wells.

Although designated as a groundwater subarea for local planning purposes, the majority of the MST is not part of a groundwater basin as mapped by the California Department of Water Resources (DWR). Depths to groundwater in the MST Subarea currently range from about 30 feet in some areas to 200 feet or greater in other areas. Groundwater level declines observed in the MST Subarea as early as the 1960s and 1970s had stabilized through the late 1990s and groundwater levels experienced a gradual decline of about 10 to 30 feet since about 2009. However, the stability of water levels over the past 9 years has shown signs of stabilizing, indicating that rate of groundwater extraction is in balance with rates of groundwater recharge.

The MST Subarea has been designated as a water deficient area by Napa County. As a result, certain proposed development projects that include the use of groundwater are more stringently regulated than in other parts of the county. An expanding recycled water distribution system in the MST subarea, supplied by the Napa Sanitation District, delivered over 422 acre-feet of recycled water to users in the MST Subarea in water year 2020. Increased use of this new source of water along with continued land use permitting constraints are expected to aid in maintaining stable groundwater level conditions in the MST subarea in the future.

Click the link or image below to open an interactive map for this subarea. 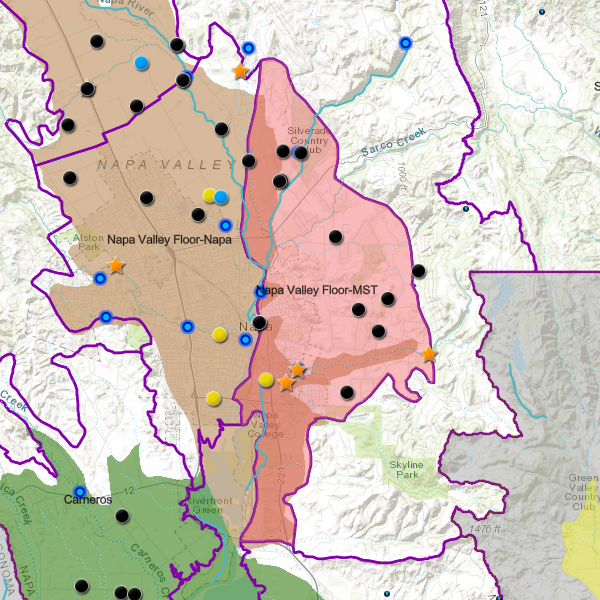